Atta is Indian whole wheat flour used to make flatbread such as chapatti, roti, paratha or puri. Traditionally fresh Atta were prepared at home by grinding wheat in homemade stone grinder known as Chakki. Atta has high fibre content due to high bran and also has high in gluten thus its doughs can be strong and rolled out very thin. Atta consist of all parts of wheat grain. It has bran, which contains fibre and other nutrients (vitamins B, iron, magnesium, and phytochemicals), endosperm, which contains carbohydrate, and germ, which consist of vitamin E and polyunsaturated fat, remain. Atta is considered healthier than Maida, which has endosperm only, thus rich in carbohydrate.
Add to Wishlist Be the first to review “Aashirvaad Atta, 1 Kg” Cancel reply 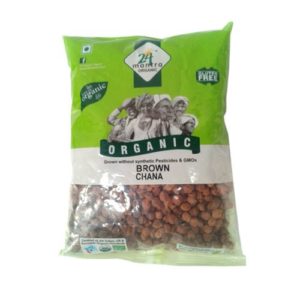 Channa is famous across the Indian continent for its multiple uses and great taste. 24 Mantra Organic brings you organic Brown Channa that is highly nutritious and totally unadulterated. Channa is considered as a rich source of protein and fibre. 24 Mantra Organic brings to you the famous Brown Channa cultivated via organic methods. You can cook yummy Channa Masala with these brown channas. Brown channa is also a favourite when served boiled along with cocktails or mocktails. Soaked channa in water is considered as rich source of good health for all gym enthusiasts, because of its high protein content. It makes an excellent snack option, and is easy to cook and digest. Try 24 Mantra Organic’s Channa as it is organically produced, pure and unadulterated. All products of 24 Mantra Organic are certified as per Indian, US and European Organic Standards. An exquisite blend of 24 pure spices, this is perhaps the most elaborate blend in the Everest repertoire. This blend is evenly balanced for taste and flavour and imparts a rare character to chhole, made from chickpeas. Everest Chicken Masala is a ready and perfect blend for making tandoori chicken and exclusive for preparation of all types of mughlai chicken curries. For chicken curry, this gives the right balance between the spice-elements and other ingredients in the dish. Pav bhaji masala is the blend that took Mumbai by storm. ‘Pav’ means a bun shaped home made bread. ‘Bhaji’ means mashed vegetables. From its humble origins in the by-lanes of Mumbai, it has become a ‘must’ on menus in 5-STAR restaurants and celebrity weddings. Dished out in the far-flung corners of the country, it has acquired the status of a foremost vegetarian recipe. The organic kismis are preserved and dried version of grapes. It is fine for the health. It can give relief from constipation, anemia, acidosis, fever.